I shared some pictures of this top with a facebook group and there were some questions about the pattern, so I thought I’d write a little more about it. 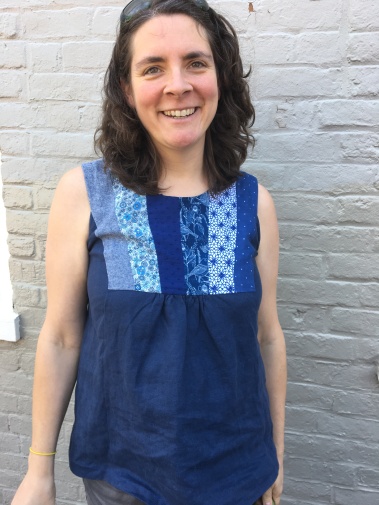 It’s the Painted Portrait Blouse/Dress pattern from Anna Maria Horner. I think that no matter a person’s personal style, it’s hard to deny that this pattern has the potential to be really fun. Just do a Google Image search and see all the different variations: sleeveless, sleeved, or the dress version; solid yoke in the same fabric as the main top; solid yoke in a contrast fabric; or my favorite, the pieced yoke.

I made this once last summer entirely from scraps. In fact, I cut up a favorite linen dress for the main pieces of the top because the dress no longer fit and the armhole edges were fraying something fierce. I used bits leftover from soft voile scarves that I made one Christmas, and some leftover eyelet sort of fabric, all in shades of coral.

Not long ago, I noticed that a lot of the garments I’ve been making are shades of navy blue. I also happened to have some scraps of navy blue linen from a pair of pants I made long ago, so it seemed the right opportunity to make the top again. I had fun carefully choosing the fabrics for the yoke pieces and the yoke facings. I’m really happy with how it turned out. 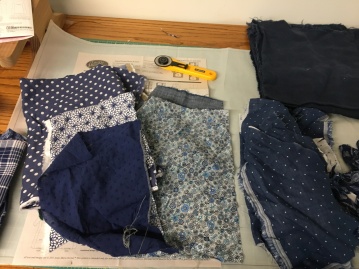 Then I set to putting the top together. I remembered having some trouble with the instructions the first time—nothing too taxing, but enough to slow me down and pause while I read and re-read the instructions. On my second go-round, I was ready: I had one 99% successful Painted Portrait top under my belt with my recollections of the trouble I had making it. I was also prepared to just take a deep breath and know it would turn out fine.

Here are the challenges that I found in the instructions:

I own a sewing shop in Lexington, Virginia. I sew, I knit, and I cook.