I am so excited about the pants, and I have so much to say it’s hard to know where to start.

Let’s start with the pants:

And a few more views. 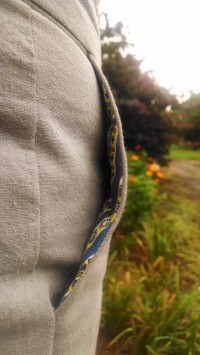 The entry of my “deep pocket.”

I will not normally tuck in a tunic.

The pants are a cotton/linen blend (I think. I’ve had the fabric for a while and don’t remember it being labeled well). I used a Waverly home decorating fabric for the waistband lining and pockets. I had a perfectly matched metal locking zipper in my stash and some pretty good thread, too.
END_OF_DOCUMENT_TOKEN_TO_BE_REPLACED

The Machinist replaced the broken oil line, and before I started using the machine again, we gave it a thorough cleaning. Imagine my surprise to find this:

I also added another small appliance to the sewing room: a shop vac, with a narrow nozzle to help keep the above from happening again.

I do have a new pair of pants, and if public opinion counts for anything, they were a successful make. But we’ll get back to that. I want to share the process that took me from thinking about making pants, to doing it.

Naturally, it started with a skirt.  I’m working with McCall’s pattern 6361 which includes shorts, capris and a skirt. Since I’ve already worked out the fit of an a-line skirt, I decided to use this silhouette to try out a fly zipper (new to me). Mostly following the directions in the pattern insert, I also searched the internet and found a tutorial on Melissa Mora’s blog. I considered this one a wearable muslin, as I made it in a home decorating cotton fabric of indeterminate age that came from a local estate sale.

Not content to quit with one practice garment, and also wanting to enlarge my pockets (I have big hands) and practice belt loops, I made another one. OK, making another skirt delayed the inevitable challenge of fitting my new trousers.

With two skirts under my belt, I decided the next step toward well-fitting pants would be well-fitting shorts. I cut out the shorts pattern in a vertical stripe fabric which was leftover from… shorts I made a couple years ago. They actually turned out pretty well, and I was really pleased with the fit until I considered how much stretch is in this mystery fabric. I could wear the original shorts once before they stretched out to be too big to stay up on their own. This didn’t bode well for pants made in a non-stretch fabric, so it was back to the drawing board.

I had been waiting for months to try out my new serger – a Christmas present. Technically, it’s an industrial 3-stitch overlock machine. I actually found it on craigslist, and then the Machinist picked it up about an hour away. He bought it from the daughter of the previous owner, who’d let it sit in a barn for years. And before he bought it, he consulted Joe, our trusty sewing machine mechanic in Rhode Island.  Joe’s response when the Machinist asked if we should grab this machine: “Can’t go wrong for fifty bucks” — in the end, purchase price was $25.

Being unfamiliar with this kind of machine, and knowing that it likely needed some work, we decided to let Joe have first crack at it. My parents were here just after Christmas and again a few weeks ago, so they kindly transported it to and from Joe’s shop. It gave me some time to re-organize my sewing room to make room for the new machine (born in the 1980s, we believe), which sits in its own table with attached motor.

Memorial Day weekend gave me the chance to see what the machine could do. I whipped up a simple A-line skirt in just an hour or so — quickly finishing inside seams with the serger. 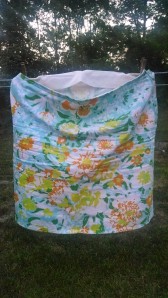 All inside seams were finished with the serger

For those unfamiliar, these machines will wrap stitches around the edge of fabric and trim it all at once — most store-bought clothes are finished in this manner. Before I made the skirt, I finished sewing a top in lightweight fabric with raglan or baseball style sleeves.

And afterwards, I re-finished the seams in a handmade blouse and dress that was starting to ravel inside.  Then I started working on a wrap skirt in a loose-woven cotton or linen that my mom gave me years ago. I was serging all around the edges, preparing to hem it when the serger stopped.  It just quit moving.

Serging used to finish all edges (pre-hemming) and side seams, so this came together very quickly

I went to find the Machinist and his preliminary diagnosis was that it had seized because oil was not getting to the proper places. His rationale was that we were running the machine with a slower motor which may not give enough oomph to the oil pump.  Fearing the worst, I finished the skirt with a regular zig-zag stitch and my Singer 201-2.  The Machinist called Joe after the weekend, and neither were very optimistic, but Joe recommended opening her up and applying penetrating oil. Before we could get to this, the Machinist left town for a long weekend.  I sent him a couple ads for sergers from craigslist in the city where he was attending an antique truck show and did some research on what I’d like to replace this Juki with — I had been bitten by the serger bug and felt it would be difficult to go on sewing forever without this handy tool.  But I didn’t want to pronounce this Juki dead – not until after we were certain it couldn’t be revived.

The Machinist checking out the Juki overlock machine

So yesterday we set out to see why it wasn’t moving.  We found a broken oil line and on further investigation, and spraying of PB Blaster, were able to get the parts moving smoothly again.  It started out as an autopsy but turned out to be exploratory surgery, I guess.  Once we find some hose that’s good for oil lines in the correct size, and perform an oil change, and replace a gasket or two, I should be back in business.

Broken oil line caused the machine to seize up

Do you have a serger? What do you most like using it for?

My pants-making mission continues. I fondly recall 2000-2001 when I made multiple versions of a pants pattern that fit quite nicely – I had shorts and capris, too. I wear pants a lot more than skirts or dresses and have committed to making more. That 14 year old pattern is missing and, let’s be honest, wouldn’t fit anyway.

I’ve been reading and thinking a lot about making pants that fit and have used the following tools:

And while wandering around the antique mall with the Machinist yesterday, I found what is my new favorite resource for pant-making.

It cost a dollar – I couldn’t resist. I love the cover image – classic 1963 graphics – but had a feeling it might be geared toward sewing with heavy polyester knits, or super high-waist styles. It’s only 64 pages long (including an index) and there are ads on the back of the dust jacket.

But what is inside is priceless.  The preface begins, “Until World War II, pants were a man’s prerogative, designed for men by men. Then Mother became an inventor of necessity. Off to defense plants she went, doffing aprons, donning pedal pushers, Capris, Bermudas, Jamaicas, and even short shorts. The clothing industry was caught with its preparedness down.”

That’s right! Not that many generations before me, women only wore dresses and skirts. A girl or woman sewing in 1963, when Else Tyroler published Sewing Pants for Women, may not have had many resources available for sewing pants.  Besides the perspective provided in this book, and the goofy humor, there actually is some good instruction. As a matter of fact, the basic concepts have remained for 40+ years. I believe I’m ready to get on with the pants fitting, to stop thinking about it and start doing it.